This past March, D.A.R.E. BC Society honoured the late Constable David Wynn with a service project supporting the needy in the Vancouver Downtown Eastside. Volunteers gathered to make sandwiches and then handed out a lunch to those in  need of a lunch and good cheer. 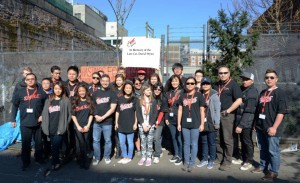 ‘He’s affected scores of young people coming out my son’s school with his D.A.R.E. program. Dozens and dozens of kids are going to make right choices because of the impact he’s made.’

He is remembered for his commitment to giving back to his community. Tragically, Cst. Wynn passed away in the line of duty in January in St. Albert. D.A.R.E. BC volunteers were proud to honour his selfless nature and giving back to those in need in Vancouver.